Innovative approach to figure out functions!

When we go through traditional buildings we can sense lots of architectural design ideas all together. In fact, master builders knew how to design, optimize and construct by the most integration they could. And it’s the main approach they had. We did not explore as much as they define to know about this approach and just bring it up by the historical story line. As I always felt this integration has worked fine also in action which I call it functional paradigms, I started to bring it up by the idea of generative design optimized toward the best it could take to generate these beautiful structures. One of the most famous module in Iranian traditional architecture is “Niyasar Kashan Chartaghi”. Chartaghi means four arches from four sides covers a space by a dome. They used this space for lots of amazing staff like astronomy. It used to built according to popular stars and also oriented functionally by polars. The question I had is if they just had these arches out of aesthetic or there is something else? So, I decided to analyze it and turns out it seems my question is not that much drifted but, it can be reliable. The material fraction the algorithm ran by Ameba on Grasshopper, showed that it’s best to reduce material based on load cases just in the locations of the arches. So they have had something engineered not just by aesthetic and it could be defined as an amazing functional paradigm through the form or better to say Shape Finding. 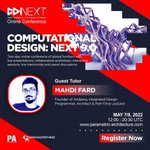